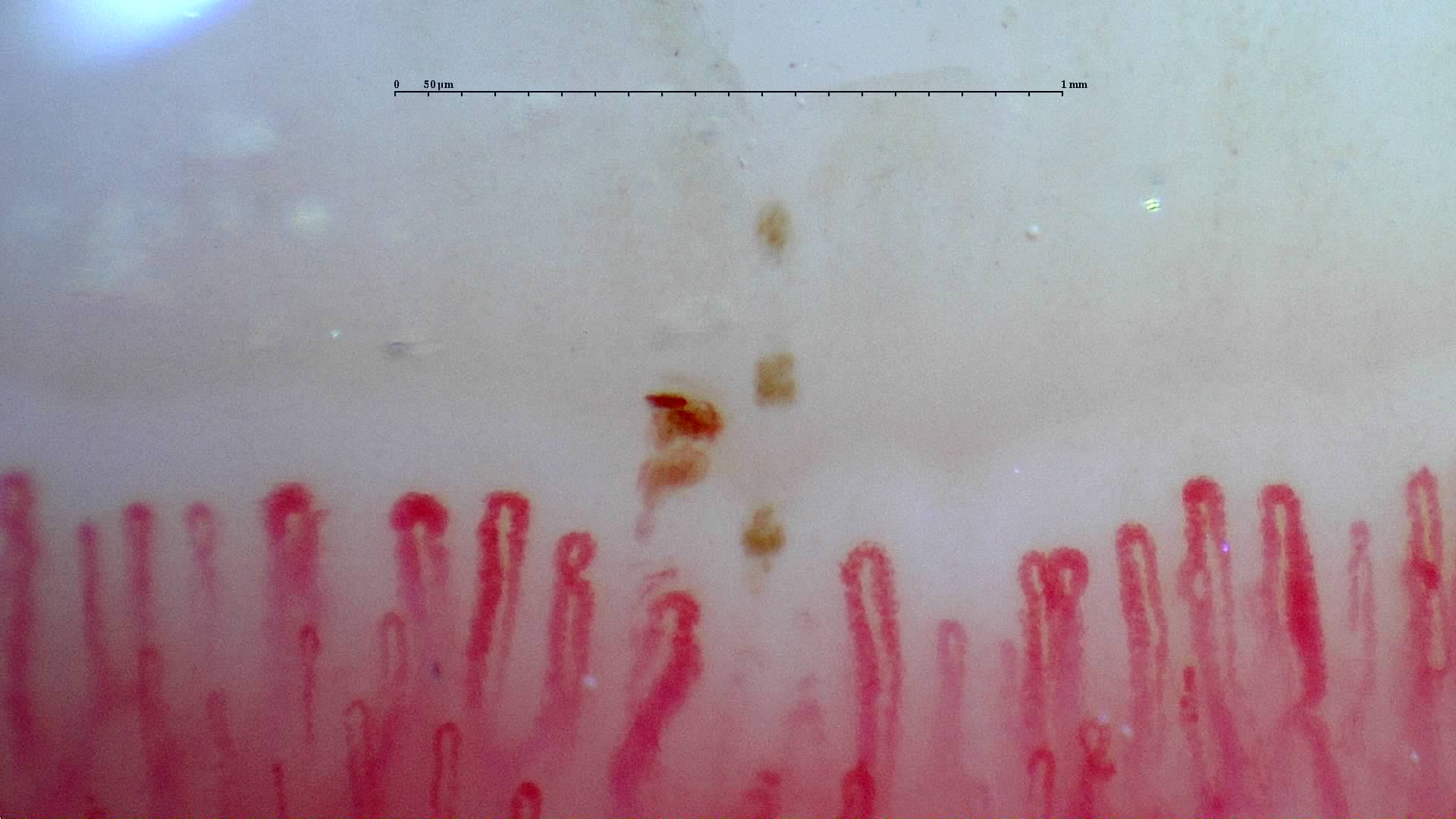 How to perform a capillaroscopy

Capillaroscopy is a useful technique in rheumatology, to evaluate conditions like Raynaud’s phenomenon, scleroderma, and systemic lupus erythematous noninvasively. The technique can help not only with diagnosis, but also to monitor a person’s disease. Often the first signs of these diseases can be seen in the nailbed capillaries. It’s such a useful tool that the American College of Rheumatology (ACR) and the European League Against Rheumatology (EULAR) include nailbed capillaroscopy in their classification criteria for systemic sclerosis (SSc).

Before diving into the ins and outs of how to perform capillaroscopy, it’s good to know that the idea for it has been around for hundreds of years. Actually it’s about 400 years old, though the scopes and magnification have of course improved since then. In 1663, JC Kolhaus visualized the nailbed blood vessels with a microscope. A few hundred years later, Giovanni Rasori described the nailbed capillary loops he saw in the nailbed, when visualized with his magnifying glass. Later that century, in 1862, Maurice Raynaud described ischemic damage in the hands and feet, leading to Raynaud’s disease being named after him. Science has progressed since then, with additional research available describing other rheumatological diseases and better understanding the relationship between the diseases and what’s seen in the nailbed capillaries.

Capillaroscopy is a technique which uses magnification to visualize the capillaries. The advantage of using the nailbeds is that the capillaries are parallel to the skin, whereas they are perpendicular elsewhere in the body. Visualization is easy and non-invasive, using a small magnifying instrument. Magnification depends on the device, but lenses ranging from low magnification of 20x up to high magnification of 1000x, are used. We recommend at least 200x magnification for the best results.

The capillaroscopy imaging technique can help internal medicine doctors, rheumatologists and dermatologists determine whether a patient’s vasculature is normal. Some capillary characteristics can lead to a further work-up, or point to signs of a specific disease. It can help with monitoring someone already diagnosed as well, to see how they are responding to treatment. For example, doctors may use it to determine if someone has primary or secondary Raynaud’s disease.

What devices do you need for capillaroscopy?

Several types of devices are available to visualize the nailbed capillaries. Some doctors use a dermatoscope instead, or another device with a low magnification lens. To get the best results, the magnification should be at least 200x.

We recommend a capillaroscope, also known as videocapillaroscopy or nailfold videocapillaroscopy. Devices can be handheld or fixed. A fixed device can be more difficult to use with patients who have flexibility issues due to their disease. Some devices involve direct contact, and some don’t. A good capillaroscope can obtain high quality images, detailed enough to visualize and measure characteristics like capillary dimensions, capillary density and to see any hemorrhaging.

Videocapillaroscopy includes a microscope with magnification lens, along with a digital video camera. This allows greater magnification than a stereomicroscope. The device may also come with software that allows the office to upload and process the images for analysis and storage.

Different scopes are available in different countries. They are relatively inexpensive. Some recent models are Smart G-Scope, Dino-Lite CapillaryScope and Optilia Digital Capillaroscope.

How do you perform a capillaroscopy?

While the steps to performing capillaroscopy are relatively easy, we recommend taking a class to ensure you’re following the proper technique, and also to gain insights for best practices. Training may be available through the capillaroscope company, as well as organizations like the ACR, EULAR and at conferences.

It’s important for patients to acclimatize to the room for at least 15 minutes, with a room temperature around 20-22° C. The clinician performing the imaging will place a drop of immersion oil on the cuticle for best visualization. The clinician would place the scope on the periungual region of one finger at a time – but not the thumb.

We recommend holding the device between your thumb and forefinger, if using a handheld device. Roll the device slowly back and forth to capture the best image. You may want to hold the device at 30-45 degrees to avoid a reflection. The clinician will be able see the distal row of capillary loops in the dermal papillae. Several images should be taken per finger, to ensure adequate coverage of the entire area. The devices often have a field of view around 1-2 mm. The device may have different lenses with different magnifications. Or there may be a dial on the device to increase or decrease magnification.

After the images are gathered, they can be uploaded to the computer if it’s not done automatically. The devices typically come with a USB connection. The images can be viewed with the patient or at a later time.

What should you look for in capillaroscopy?

Clinicians should look at and measure a number of parameters on capillaroscopy. That includes:

The characteristics should not only be measured, but graded as well, with results used to help assess potential disease or monitor the patient over time.

In healthy patients, the nailbed capillaries typically have a homogenous color, shape and size. They would be transversely arranged across the nailbed. Normal capillary density is 7-12 capillaries per mm with an average of 9. An apical width of a normal capillary is generally between 10 and 25 μm, and an apical width of 50 μm or larger is considered a giant capillary (an potential indicator of SSc). While there may be some micro-bleeding, a normal patient would not have a lot. Capillaries may vary by finger even for the same individual.

While it’s possible for doctors to analyze their own images, it’s difficult to do so uniformly. That’s why an internal medicine physician founded Capillary.io, training AI algorithms to detect, measure and quantify the various characteristics. With a unique reporting feature, the clinician can generate a standardized or customized report for analysis and for the patient’s chart. The images can also be used for research, or shared with clinicians in the same group.

To learn more about how Capillary.io’s algorithm can improve your analysis and save you time, contact us here for a demonstration.

← AI and Medical Diagnosis: A Compact Guide
How Nailfold Capillaroscopy Guides the Challenging Diagnosis of Scleroderma? →