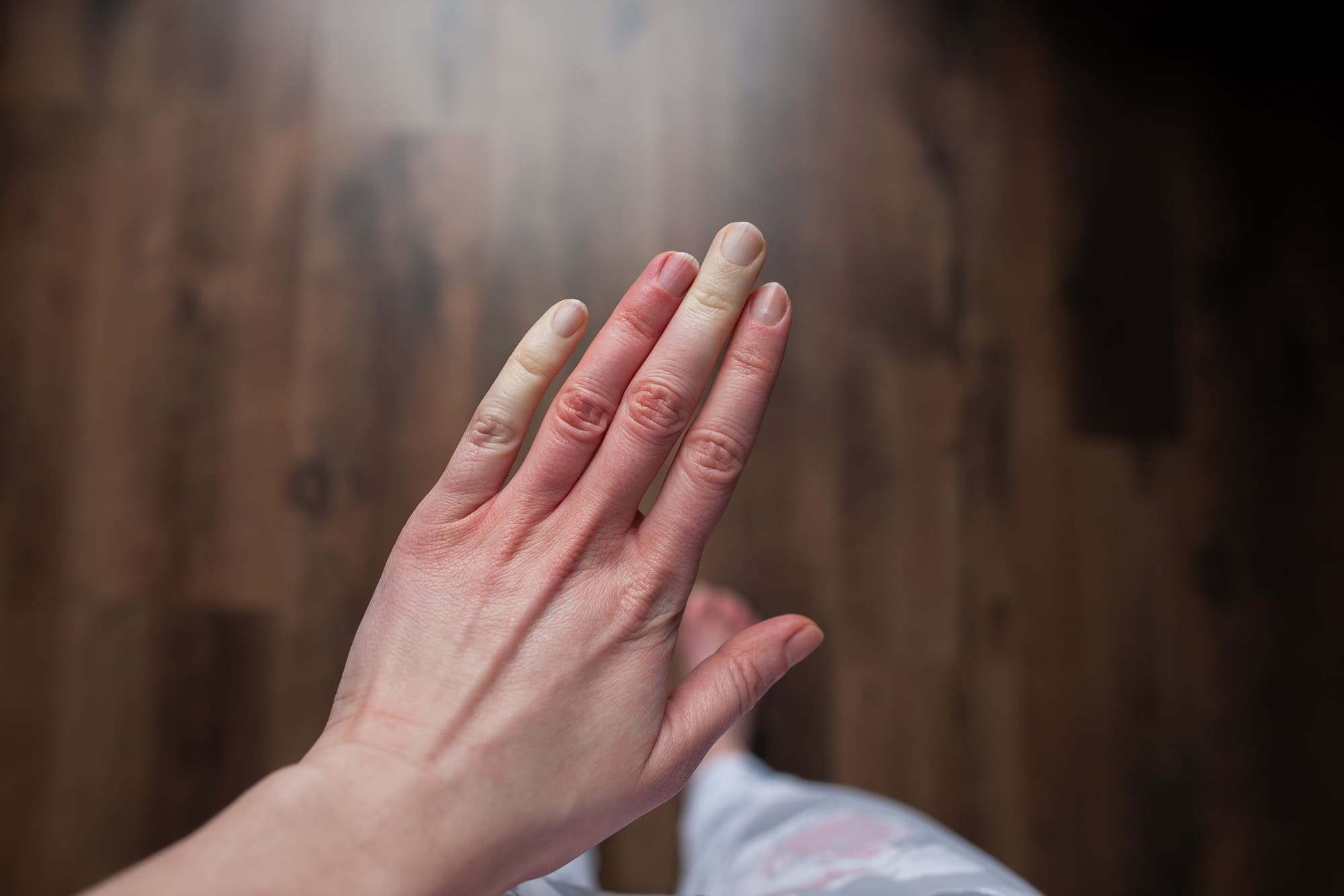 Read more to find about the role of nailfold capillaroscopy in Raynaud's Phenomenon.

Living with Raynaud’s Phenomenon is an inconvenience for our patients, it means having to avoid triggers like cold and stress. But Raynaud’s can also be a symptom of a more serious underlying condition like lupus or scleroderma (systemic sclerosis). Early detection is critical whether the condition is primary (unknown etiology) or secondary (known etiology).

Today, we know there are tools and recommendations for improving the clinical accuracy of a diagnosis and its progression.

We will also introduce Capillary.io, a state-of-the-art capillaroscopy data management system, and some pressing problems that rheumatologists face when diagnosing and following the progression of RP.

Raynaud’s Phenomenon – What is it?

Raynaud’s Phenomenon is a medical condition and disorder of the microvasculature associated with a decreased blood flow to the fingers. In some cases, capillary changes are also noted in the toes, ears, knees, nose, and nipples as well.

The problem occurs when the blood vessels in those areas go into spasms when triggered by cold or stress. Raynaud’s can occur in an isolated manner (primary), or it can be a symptom of a severe underlying autoimmune or connective tissue disease like systemic sclerosis.

Patients with Raynaud’s Phenomenon present with a variety of symptoms, including:

The initial diagnosis of RP begins with a study of the patient’s medical history and a physical exam.

Adults over age 35 might be tested for underlying diseases.

If RP is suspected, blood tests might be warranted to check whether the condition is primary or secondary.

Step 1: Ask questions such as, “are your fingers sensitive to cold?”

If the answer is yes, proceed to the second step.

A hallmark of Raynaud’s Phenomenon is the biphasic color changes (white, blue) when the fingers are exposed to cold, sudden but mild temperature changes, and even stress.

If there are changes, proceed to the third step.

The score is measured based on the following criteria:

The patient has Raynaud’s Phenomenon if they meet three or more criteria from Step 3.

The diagnostic criteria for primary Raynaud’s Phenomenon are as follows:

The role of nailfold capillaroscopy (NFC) takes center stage in clinical practice. It is the diagnostic tool for rheumatologists in evaluating several rheumatic diseases and diagnosing Raynaud’s Phenomenon.

Today, NFC is included in the American College of Rheumatology (ACR) and European League Against Rheumatism (EULAR) classification criteria for SSc.

Recommendations for normality and abnormality in capillaroscopy

How many fingers must be examined during a routine capillaroscopic examination?

Examining all eight fingers (excluding thumbs) is the gold standard. Examining as few as four fingers could reduce the capillaroscopy’s sensitivity, and some abnormalities might be missed. Click here for a journal article that aims to address the question, “how many fingers must be routinely assessed to capture the true state of capillaries?”

The presence of Raynaud’s Phenomenon in a patient should move the physician to analyze the condition further to distinguish it as primary or secondary in nature. That’s where nailbed capillaroscopy comes in handy. It can be used to evaluate the morphological abnormalities and capillary patterns of nailfold capillaries in patients with RP.

Nailbed capillaroscopy is an excellent tool for analyzing the capillaroscopic patterns in Raynaud Phenomenon. It is a non-invasive procedure, simple, inexpensive, and provides excellent predictive distinction between primary and secondary RP.

Primary RP presents with normal nailfold capillaroscopic patterns – a parallel arrangement of capillaries with appropriate caliber and shape. However, in the case of secondary RP, capillary abnormalities are present. Mega capillaries are the most critical abnormal characteristics of various connective tissue diseases.

Some reports even suggest that the presence of an abnormal pattern of nail fold capillaries in people diagnosed with primary Raynaud’s is an excellent way to predict the development of CTD.

Nailfold Capillaroscopic Findings in Rheumatic Diseases: Many changes can be seen in female and male patients and they may include: loss of capillaries, microvascular changes, digital ulcers, capillary hemorrhages.

Unlike a typical capillary that has an inverted U appearance, the capillaries in a patient with scleroderma and other connective tissue disease exhibit morphological variations like intertwined loops and tortuous capillaries.

Various parameters are mentioned in journals regarding capillary size. While some studies have reported on the apical diameter, arterial limb, and venous limb, others have considered the entire width of the capillary loop.

Nailfold Capillaroscopy in Rheumatic Diseases: Which Parameters Should Be Evaluated?

Normal loop diameter is up to 20 µm, or even 25 µm according to recent studies, as well as our observations. From our perspective, this may change to 25 um with newer research. The capillary can be classified as giant if its size is greater than 50 um, a significant difference. Capillary enlargement occurs in many conditions; however, homogeneously enlarged capillaries are typically seen in three connective tissue diseases: scleroderma, mixed connective tissue disease and dermatomyositis.

Microhemorrhages are reddish brown lesions in the nailbed and a warning sign of early vascular damage. They are most commonly noted in CTDs like scleroderma.

NFC in Screening and Diagnosis of Raynaud’s Phenomenon

Nailfold Capillaroscopy can distinguish between primary and secondary RP. It can also be used to identify patients who present with no evidence of CTD and are at risk of developing CTDs, as noted in one particular study. The study was conducted on 58 patients with confirmed RP - 44 primary and 14 cases with secondary RP.

Eight patients had abnormal capillaroscopic patterns, two of whom presented with a pattern typical of that found in scleroderma.

Throughout this section, we refer to a recent study published in the journal Circulation, that examined the relation of nail fold capillaries and autoantibodies to mortality, specifically in patients with RP. Two thousand nine hundred and fifty-eight (2958) patients with Raynaud’s Phenomenon were selected for the study. All the patients were without a previously known history of connective tissue disease.

According to research that studied the relationship of nailfold capillaroscopy and autoantibodies to mortality in patients with Raynaud’s, ANA titers greater or equal >= 1:160 is positive. Therefore, the study concluded that venous blood samples should be drawn from any patient with Raynaud’s to assess ANA titers.

The presence of both abnormal nailfold capillaries and antinuclear autoantibodies was linked with the highest mortality.

The survival data of the national Austrian Statistics on Deaths were used in this study as a reference. The standard population could be matched by age and sex to a study population. Patient survival depends on age, sex, and the year of the initial examination, and life tables allowed for the individual calculation of the life expectance of each person of the standard population.

Results of the Study

There is a direct correlation between the presence of abnormal nailfold capillaries and autoantibodies, which is linked with poor survival rates in patients with Raynaud’s Phenomenon without previously known connective tissue disease. More studies must be conducted for a better understanding of the condition.

Nailfold capillaroscopy along with laboratory tests are warranted in patients with Raynaud’s Phenomenon. Capillary aberrations and various metrics must be considered to build each patient’s complete and reliable profile. Immunologic markers are a critical factor in the detection of CTD and in estimating the risk of patients with Raynaud’s Phenomenon.

A software solution like Capillary.io can help accurately diagnose Raynaud’s Phenomenon, saving physicians and rheumatologists time, improving patient compliance, and providing patients with the quality of care they expect and find satisfactory.

Some limitations of relying only on nailfold capillaroscopy

Earlier in the article, we referenced the ‘very early’ diagnosis of SSc (VEDOSS criteria), which resulted from a three Delphi-rounds consensus study, where experts were asked to choose the items they considered the most important for very early diagnosis of SSc.

In the very early diagnosis of SSc (VEDOSS) cohort study the early scleroderma pattern predominance of giants and no overt loss of capillaries, is the most prevalent presentation.

Capillary.io is an advanced medical videocapillaroscopy software solution designed to improve the objectivity, efficiency, and acceleration of nailfold capillaroscopy, while simultaneously fostering collaboration between physicians. It helps diagnose Raynaud’s Phenomenon with more speed and accuracy. It has an all-inclusive approach that considers serological tests, nailfold capillaroscopy, sex and age of patients, and several other factors. The software transforms a routine capillaroscopic procedure into a state-of-art solution that uses artificial intelligence. The software guides physicians to take photos and analyze them, providing specific insights quickly and seamlessly. Below is an example of a report obtained from Capillary.io’s platform.

A capillaroscopy report by Capillary.io

The software can be used with any capillaroscope, and locates specific capillaries instantly and intelligently. The system also allows rheumatologists to share and collaborate data with other professionals in an organized manner, with the least effort.

Nailfold capillaroscopy is the gold standard for rheumatologists to diagnose and examine the progression of the condition in people with Raynaud’s Phenomenon. It can also be used to differentiate between primary and secondary RP and detect early signs of CTD. However, it must be considered along with serological tests as well. The progression of the condition must be monitored regularly.

Physicians must not rely on subjective data alone when creating capillary reports. Quantitative and qualitative data must be obtained and analyzed across the nailfold. Various nailfold capillaroscopic measures must be considered when diagnosing RP.

Finally, Capillary.io is a modern software that can play an important role in diagnosis. It can be hooked up with any capillaroscope for faster, more accurate detection, measurement, and classification of all the capillaries.

Schedule a brief call with the Capillary.io team to set up a free trial account. And to discuss how we can help improve your workflows saving time and cutting costs.

Victor Phillips is a Digital Health Technologist Consultant, and Medical Content Writer. Reach out to him for help with your next project.